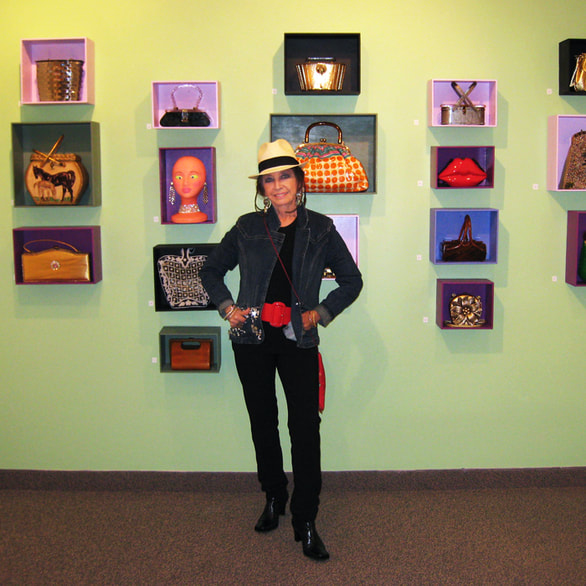 Patricia Zinsmeister Parker's career spans four decades, and her work is best described as narrative abstract expressionism. Her painting methodology is based on a well honed sense of intuition acted upon with random gestures, which eventually suggest the content of the paintings and prints.  The subject matter  (iconic shapes, symbols and color tonalities) comes together in the ‘’soup’’ of pigment, collage and ideas which evolve with the flow of physical activity.
Parker was an adjunct professor at the University of Akron in the School of Art from 1978-1998,  During the same time she was establishing an impressive exhibition schedule.  She was the first female painter to exhibit work in the Cleveland Museum’s  “The Invitational: Artists of Northeast Ohio,” an exhibition honoring regional artists.  “Cleveland Collects Contemporary Art,” a major exhibition at the museum, showcased a large painting “Art”  from the collection of the Jones Day law firm.  She has had solo shows at major museums and universities throughout Ohio, including a major retrospective at the Butler Institute of American Art in Youngstown.  In 2005, the University of Akron hosted a solo exhibition of her paintings, prints and drawings.  Cleveland State University held a solo show of paintings in 2007, and in 2010 Parker was invited to participate in the “18th Annual Women’s Invitational” at  Ursuline College in Pepper Pike, Ohio.  The Canton Museum held an exhibition of her paintings  (“Director’s Choice”)  in 2011.   Other venues include Washington, D.C., Chicago and Xiamen University in southern China and Xian University in central China.  Parker’s paintings are included in numerous corporate collections such as Kaiser Permanente,  B.P. America,  The Ritz Carlton,  Forest City Inc.,  The City Club of Cleveland and the law firm of Baker & Mc Kenzie (Chicago, Illinois).  Her work is also represented in the collections of Cleveland law firms Jones Day,  Hahn Loeser & Parks,  Benesch Friedlander and Squires Sanders and Dempsey.
Parker’s paintings are represented in the collections of  the Akron Art Museum, the Butler Institute of American Art, Youngstown, Ohio, the Canton Museum of Art, Kent State University, Case Western Reserve University, Archives of American Art (Smithsonian Institution) and Artists Archives of the Western Reserve.   Parker was recognized by the Senate of the State of Ohio for induction into the Hall of Fame for contributions and achievements in Art.  She is represented by The Harris-Stanton Gallery in Akron and Cleveland, Ohio, and is a Founding Member and Archived Artist in the Artists Archive of the Western Reserve in Cleveland.
Parker holds B.F.A., M.A. and M.F.A. degrees from Kent  State University, and  pursued independent study from 2004-2008 at the Instituto de Allende, Mexico.

Art Box Projects. Selected to participate in the New York Art Week in March of 2018.  ARTBOX Gallery was founded in
Switzerland in 2017

The Archives Speak, Insights and Images of Ohio Artists Exhibition on the occasion of the landmark publication of the book
Archives Speak. Artists Archives of the Western Reserve (Cleveland, Ohio), 2015

Lemons acquired by The Cleveland Foundation for its permanent collection, 2014

A Piece of My Mind, Solo Exhibition of Paintings, Drawings, and Monoprints. Exhibition Catalog published. The University of Akron (Akron Ohio),  2005.

Recognized by the Senate of the State of Ohio for Induction into the Hall of Fame for achievements and contributions to Art. 1994.

In Pursuit of Possibilities.  Review of Director’s Choice Exhibition at the Canton Museum of Art. .  Artwach Blog, May 21st, 2011. Tom Wachunas

This entire website, including all designs, texts and descriptions, is copyright ©2016 Patricia Zinsmeister Parker.  Unauthorized reproduction is prohibited.  All rights reserved.